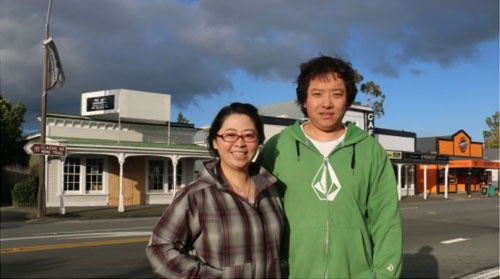 Weekend customers queuing out the door prompted the owners of Featherston's Everest Cafe and Bistro to move into a bigger shop.

Lesley He and Kevin Li, partners in business and life, say their existing space is "too crowded and too small" for their cafe, which has steadily been getting busier since it opened in 2012. Ms He said over a summer weekend the cafe would have a queue out the door.

The couple are moving the cafe two doors down from its present spot on Fitzherbert St into a building they have purchased. "Our own building - not renting anymore," said Ms He. In its new location, Everest will be twice the size it is now.

The pair, both in their early 30s, aim to have it up and running by mid-December. Mr Li and Ms He bought the building on Featherston's main street late last year and they have spent eight months doing up the interior.

Ms He said regulars could still expect to find the same Everest pies, pastries and freshly baked breads in the new shop, and all products that could be would be sourced from the area.

Mr Li said he was most excited about his new pizza oven, imported from Italy. "We're going to upgrade the baking side of things," he said. "At the moment we use a very small oven to bake breads and it's not to perfection. "We're going to buy a deck oven which has a ceramic stone at the bottom and a steam function to make better pastries and breads."

The cafe side of the business would be open seven days a week and the bistro would offer hot evening meals on Fridays, Saturdays and Sundays. The Bistro would have a "countryside sort of feel" and would offer "modern New Zealand cuisine" with influences from other countries.

Initially when the couple bought the shop their plan was to open an Asian fusion restaurant. However, they have since decided not to limit themselves to just Asian but to also include European elements.

Ms He has a financial background and had no prior hospitality experience before opening the cafe three and a half years ago, but Mr Li had been working as a chef for 10 years.

After deciding to open their own business, the couple, who had been living in Wellington for eight years, had taken a day trip to Wairarapa. "I had a feeling that Featherston was the place," Ms He said. "I can't really describe the reason - it was not a familiar area - but as soon as we came through the Rimutakas we knew that this is the place to have our first restaurant open up. "And the support we have here is phenomenal," she said.