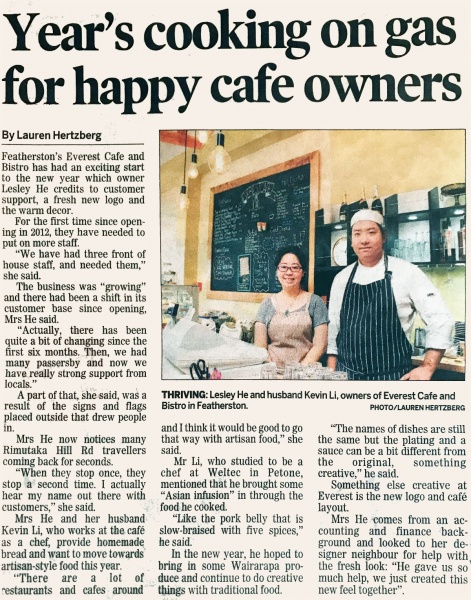 Featherston's Everest Cafe and Bistro has had an exciting start to the new year which owner Lesley He credits to customer support, a fresh new logo and the warm decor. For the first time since opening in 2012, they have needed to put on more staff.

"We have had three front of house staff, and needed them", she said. The business was "growing" and there had been a shift in its customer base since opening, Mrs He said. "Actually, there has been quite a bit of changing since the first six months. Then, we had many passersby and now we have really strong support from locals." A part of that, she said, was a result of the signs and flags placed outside that drew people in.

Mrs He now notices many Rimutaka Hill Rd travellers coming back for seconds. "When they stop once, they stop a second time. I actually hear my name out there with customers" she said.

Mrs He and her husband Kevin Li, who works at the cafe as a chef, provide homemade bread and want to move towards artisan-style food this year. "There are a lot of restaurants and cafes around and I think it would be good to go that way with artisan food", she said. Mr Li, who studied to be a chef at Weltec in Petone, mentioned that he brought some "Asian infusion" in though the food he cooked. "Like the pork belly that is slow-braised with five spices", he said.

In the new year, he hoped to bring in some Wairarapa produce and continue to do creative things with traditional food. "The names of dishes are still the same but the plating and a sauce can be a bit different from the original, something creative", he said.

Something else creative at Everest is the new logo and cafe layout. Mrs He comes from an accounting and finance background and looked to her designer neighbour for help with the fresh look: "He gave us so much help, we just created this new feel together".